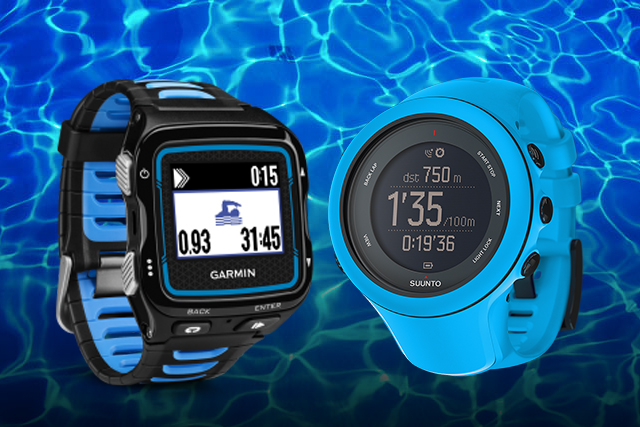 I already compared the 920Xt to the Polar V800 which felt a bit unfair as, but Polar has since updated their swim metrics making it a better competition. But the Ambit3 is already a worthy adversary. So here I compare the two sports watches from a triathlon perspective. Both watches come in a sporty design but the Suunto Ambit3 comes in a sleek black too. I wonder why Garmin decided not to make an all black model but opted for very brightly colored designs. They stand out, that’s for sure, Maybe it’s the new fashion and that’s why Cervélo went with a bright red coat of paint on the P5 too.

The Forerunner 920XT has a built in step counter and the battery can last up to four months in watch mode where the Suunto doesn’t save this information. But for the eye, the Suunto looks better, unless you’re going to an eighties party, the Suunto will almost look like a normal watch. Both watches have the ability to work together with your phone, for the Suunto it’s iPhone only though, but they can display messages, weather etc. A little extra points for Garmin here as they allow third party apps to be developed via their new Garmin IQ, so let’s see how far this will go.

Another fun feature of Garmin is, when paired with your smartphone your friends can cheer you on with little notifications on the screen and track your progress live on the Garmin website.

The Forerunner 920XT and the Suunto both save all the usefull data (heart rate, cadence, power, speed, GPS, etc.), so what I’ll focus on are the differences, where one is lacking or excelling in a swim, bike, run sequence, as that seems the most logical to me. Hello Suunto! The Ambit3 can record heart rate while swimming using the really small Bluetooth Smart Heart Rate sensor. The little HRM can even record your heart rate for you if the watch is inconvenient. However, when swimming the 920Xt has support for tracking the drills you do and can notify you by vibrations upon reaching a certain time or distance. And since the Suunto does swim heart rate in a burst send when the wireless connection is restored I wouldn’t be surprised if Garmin will support this in the future too. The Suunto HRM Strap is available for $68.

Not much difference between the two watches, but development in Cycling has been on a stand still in the last couple of years with only power meters becoming more and more available to ‘the common people’. The Ambit3 has BTLE and is thus limited on optional power meters, that means the majority of power meters are not compatible, but if you plan to upgrade, most of the new power meters, like Stages, support this too.
And when hooked up to a HRM and power meter the 920XT can calculate your V02 Max and compare it to your age group competition. Also, you can get a quick release for the Garmin, which will allow you to mount the watch on your stem/steer and not have it on your wrist quickly, just like a ‘normal’ bike computer.

Recording vertical oscillation is native to the 920XT (with the HRM) but this isn’t available on the Ambit3 both record cadence. Suunto records it in the watch and Garmin uses support of the HRM for this metric. Also the Forerunner also has a metronome feature which will help on the technique aspect, question is, does someone who wants to pay $500 for a sportswatch need to work on their running cadence? Well, at least you can. Both watches will give you an estimated VO2 Max.

The movescount app of Suunto is pretty neat. You can set all the settings of the Ambit3 using your iPhone. Only an iPhone. Nevertheless, pretty neat. But on the 920XT you can do this on the watch itself, even during your exercise you can change what metrics are displayed.

For ultra athletes or trekkers, the 920XT and Ambit3 can be set to an battery efficient mode with GPS recording where it stores data less often but will be able to extend from 24 hours to 40 hours for the Garmin and up to 50 hours for the Suunto. So that would be a tie.

It’s a close call between the two watches and the decision would be up to your preferences as I don’t think either is a bad purchase. The 920XT has all the features of the Ambit3 except for the swimming heart rate. It isn’t to say this won’t be a future feature, but would you bet on that if it’s important to you? If you’re upgrading from an existing setup with ANT+ or Bluetooth speed, cadence and power meter, stick to what is supported, Garmin is ANT+ and Suunto Bluetooth.

These prices are the localised where possible.

More info about the Ambit 3 and it’s varieties are in my quick comparison.

I have the privilege to test and review the Polar