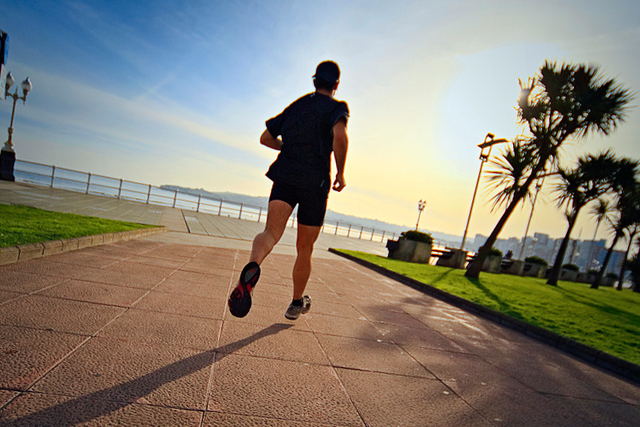 So you decided you need to start running, but a short jog to the end of the street already looks like quite an achievement to you? Not to worry, everybody has to start somewhere. We’ve gathered seven running tips for beginners and general rookies struggling to get better. Before you’ll know it that 5K or half Marathon is a piece of cake.

Wearing the right shoes is very important, especially if running is becoming your hobby. As everybody is different, everybody’s feet are different too. Got to a store where they give proper advice on what shoes to get. Usually this includes you run a short bit where a specialist has a look at how your feet behave. Usually this is free of charge. So don’t go to SuperSportsDiscount, spend your money right and prevent injuries! Also, you want to throw them out sooner than you might think. As you use your shoes, they wear, maybe not visibly, but the cushioning deteriorates every step you make.Some say sooner, some say later, but after about 600 miles (or roughly 1000 km) you will want to replace those shoes.

Again on injury prevention, learning to pace yourself is very important and there is no shame in walking! Going out to fast will only burn you out, eventually you won’t sprint the whole 21K, you’ll be running at a pace where your body is capable of delivering the energy at the same speed as you’re using it. This is slow at first. A widely used method is on/off running. Run 5 minutes, walk 2, run 5, etc. Over time shorten your breaks and lengthen your running; before you know it you’re running 30 minutes in one go.

Once you get to about an hour, warmup, stretching and cool downs become more and more important. Warmups allow your body to get ready for action, pumping oxygen rich blood to the muscles you use (see our swim tips too) and by doing so preventing injuries. And stretching allows to to stay flexible, which is always a good thing.

Often overlooked, but core strength is an important factor in running efficiently. Not much to say about it, see this article for some good exercises: http://www.active.com/fitness/articles/5-core-exercises-that-increase-stability-and-running-efficiency

The longer you run the more important it is to get new energy in your body. Think of it like a car’s fuel, you need to put fuel in your car to keep it running. Luckily for you you can do this while running. Make a plan on what you’ll eat and try it on your practice sessions. If you’re able, find out what energy drink and food is provided at your big event and start training with that. Very important is to stay hydrated, when in doubt, drink.

Running cadence is widely known to be optimal at around 180 steps a minute, that is left and right foot. (so 90 if you count both legs). In order to get yourself to a good cadence you can buy foot-pods for the high end watches, but a cheaper option is to install a metronome app on your phone. Set the app to 180 bpm and start running. You will hear the tick-tock and just try to get into the cadence. Don’t be surprised if you can’t make that, running at that cadence is pretty hard. So it’s a bit too fast for you, just tone it down to where you’re comfortable and work your way up a couple of beats every week. After a couple of times you won’t need the metronome anymore and you’ll run with a high cadence all by yourself.

Last but not least, the best motivator to keep running is that you have a goal. Sign up for an event and mark your calendar. You’ve already spent the money so better do the training too!

2 Comments on Running tips for beginners

If you wonder what your body battery looks like wh

Incase you missed it, Wahoo announced and teased a