So Wahoo Fitness released the Tickr series with the Tickr, the Tickr Run, and the Tickr X. All of these chest strap heart rate monitors have dual functionality, in means that they support both ANT+ and Bluetooth. Allowing you to use it with your existing watch and/or your smartphone. The Tickr X even has built in memory, so you can use it as a stand alone workout tracker on the treadmill or outside.

The top of the series is the Tickr X, besides being the most versatile also the most expensive. But it comes with a bulk of options.

The Tickr X has a built in memory, allowing you to do workouts, indoors or outdoors without a phone or watch. You won’t have GPS coordinates, but you will have heart rate, running cadence, vertical oscillation, GTC (ground contact time).

All you need to do it put the strap on. It basically starts recording right after. If you want to make sure it does, just double tap it and you’ll get a quick feedback buzz. This also ads a marker in the session, but you can set the behavior of the double tap to pause our music if you want to. After your workout you can pull up the app, sync your offline workout and you’ll see your data in the App.

Wahoo is working hard on adding swim recognition to the Tickr X, and I’ve tested it in the pool to see how well it records the heart rate. Setting the chest strap to the smallest possible size, I was still comfortable and the strap didn’t creep down during push offs, but I never push off hard anyway. The one thing I noticed is that the Tickr X does have problems with recording the heart rate while swimming, as you can see in this graph:

The flat-lines are not because I needed resuscitation.

I aligned this data over my recordings with my Garmin 910 to track my laps and so, and it’s clear that during lanes, it has trouble picking up heart rate. So in this graph all the sudden spikes are my rests, you can then see my heart rate drop and flat line as I start a new lane (I took pretty long when recording this). 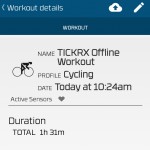 The information in the Wahoo Fitness app (click for all info)

Using the strap as a HRM monitor works perfectly on the bike since it supports both ANT+ and Bluetooth. I’ve was able to use it with a Garmin 910XT and Android phone simultaneously.

A perk of the Tickr X is the ability to measure cadence on a bike when linked to the app, but only on the indoor mode. When you wear it just as a stand alone, it will measure your heart rate.

With the Fitness app you can track your Running Smoothness. This is a way to work on your running efficiency. The Wahoo Fitness app takes your cadence, ground contact time, vertical oscillation and sideway movement and puts this into one number, ranged from 50-150. The higher the number, the better you are doing. During my run, it’s obvious that one of my improvement points is my running cadence. In my first run, I did my regular cadence of around 150, which resulted in a smoothness score of 100. It looks like my vertical oscillation (up-down) is not really efficient and I can also improve in my left-right motion.

My second run, I used a metronome app on my phone to give me a higher cadence. Increasing my cadence should decrease my vertical oscillation and hopefully decrease my left right movement, and thus making my run more efficient as I won’t be as bouncy and will waste less energy. I got up to a running cadence of about 165, which is better, and my smoothness score did go up, but so did my pace, so I have to practice on that a bit more. But looking at the data, my vertical oscillation went down by a full centimeter from 10.2 to 9.1 average. So I was going faster, but my effort was basically the same (my heart rate was similar).
If you take the 1cm I saved every step and extrapolate this, that would mean over a 3:30 marathon I would save not ‘jumping’ a whole 391 meters. That’s an entire Empire State building NOT climbed! Simultaneously, my ground contact time dropped from 329ms to 305ms, which makes sense as my cadence went up.

I do believe the smoothness is a good factor, and improving your cadence and technique makes a better runner, but it takes time to get used to it. Working with a metronome helps and the numbers in the app are a good reminder to keep a focus on your technique, slowly build up your cadence, just at a couple every other run and work your way towards the higher cadence.

The manual for Android is minimal, but the app has all the features. The lack of isn’t really an issue, as the app is pretty self explanatory. Just like other fitness apps Wahoo Fitness allows you to record session and hook it up with Sensors. It depends on your phone which sensors you can use, so make sure it matches up.
You can set profiles and which screens you’d like to see during the sessions. After your session you can easily upload your workout to Strava, Training Peaks, Garmin, Nike, Runkeeper, MapMyFitness and Magellan. 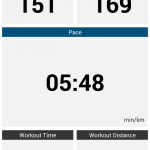 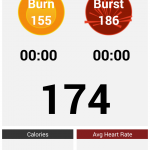 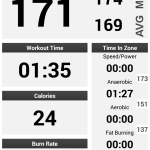 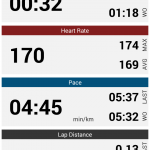 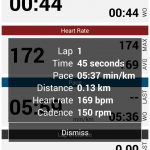 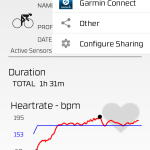 You can easily send your workout to your linked accounts.

In December Wahoo released the Tickr X API and a stand alone Workouts App (for iPhone). As I lack an iPhone, I was unable to test this app. DC Rainmaker wrote a nice article about it which you can read here. The release of the API is promising, it will allow third party developers (Strava, TomTom, Garmin, Polar, Suunto) to use the motion sensors in the chest strap and read the data. Since this data is proprietary in ANT+ and thus only available for the Garmin 920XT with a Garmin chest strap, the release will hopefully make a standard for Bluetooth.

The Wahoo Tickr X is extremely compatible. Due to it’s built in dual support of ANT+ and Bluetooth, you can connect it to almost anything. It’s supported by over 50 different Apps on the iPhone and Android. If you want to make sure your phone is compatible, check the lists: iPhone and Android.

Overall I’d say the Tickr series offer very good value for money and the added bonus is the dual connectivity. With the Wahoo Fitness app you also get audio feedback during your session, informing you, during runs for example, of your pace, cadence and heart rate of your last kilometer. And the price of the Tickr X isn’t shocking either, it’s right there amongst most of the premium chest straps.

Ran another 10k and met my biggest fans when I was

Are you ready to rock this weekend? #mtb #cycling

Five years ago I started my blog. Three years ago

This error message is only visible to WordPress admins