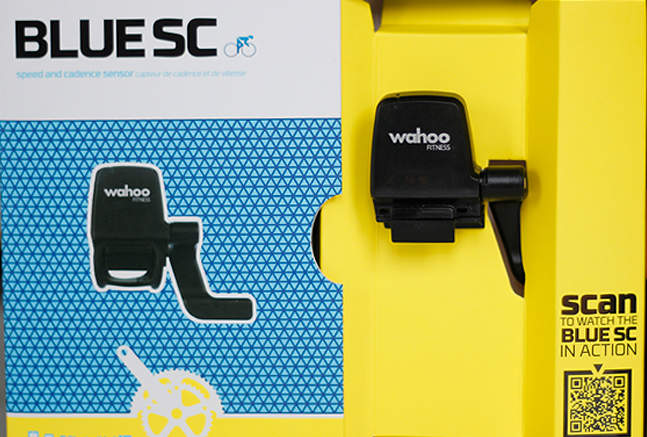 The Wahoo Fitness Blue SC is a speed and cadence sensor which is equipped with both Bluetooth 4.0 and ANT+. This means it’s compatible with Garmin, Suunto, TomTom, Polar, iPhone 4 and up, and numerous Android devices. Combine this with the Wahoo Tickr heart rate strap and you no longer need that expensive watch as your phone can do it all (swimming might be a stretch though). The Blue SC is available for $55 which includes free shipping.

The Blue SC in it’s box.

Now what I really like, is the tie-wrap, tapeless solution for the magnets and sensor itself. This allows you to easily and quickly mount the sensor, adjust it and quickly swap to a different bike. And giving it’s dual system this is actually useful as you can track every ride you do. So if you go on that one off Mountainbike weekend, bring your cadence sensor! Or lend it out to a friend who would like to try it out first.

So, it appears Wahoo has decided that tie wraps or tape should be a thing of the past and for most of us that should work. The Blue SC comes with a nice rubber strap (incidentally it’s marked XS, but currently no other sizes are available). I managed to squeeze it on the chainstay with a bit of effort and my oversize FSA cranks gave a little resistance for the magnet band, but overall I had no notable issues and had the setup running within five minutes (I’ve struggled longer in the past with other devices). A couple of days later I actually installed a new crankset on the girls bike and forgot to add the magnet for her cadence, so I quickly took it of my crank and pushed it on hers. It was that easy. No tape! 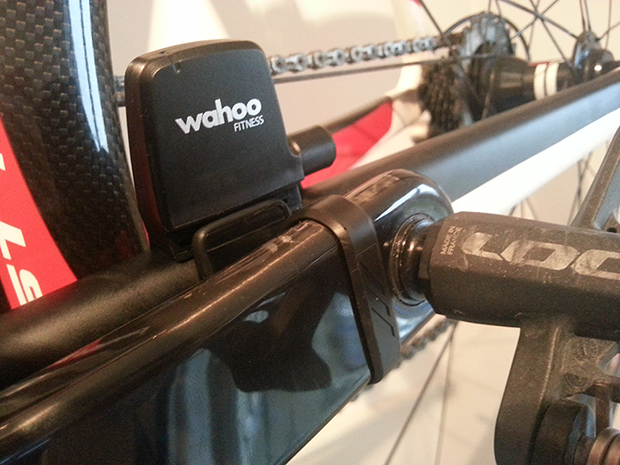 It was a bit of work, but even the big carbon chainstay is no problem.

However, if you can’t make the rubber strap fit, the box contains two tie wraps too. For power, the sensor unit uses a common CR2032 battery which is easily replaced too. Just take a coin and undo the little back cover.

Due to it’s dual connectivity options it’s compatible with heaps of devices of Garmin, Suunto, TomTom, Polar etc. But also your smartphone and tablet. iPhone 4s or newer and heaps of Android devices (see the officially supported full list here). And thus also a list of apps, besides Wahoo’s own app ‘Fitness’ you can use Strava, Endomondo, Runtastic, etc.
Note: for Endomondo, they only support Cadence via the ANT+ protocol, so your phone needs to support ANT+ if you want to use any cadence sensor. See the reply below!

Wahoo’s instructions are available for iPhone and Android. It got instantly detected in Strava (use BT 4.0) and the Wahoo Fitness app itself. I also had no trouble paring the sensor to Garmin, Polar, Suunto and TomTom devices. The dual connectivity requires no extra setup and works from the box, connecting to multiple devices at the same time too (for ANT+).

If you want to use the Bluetooth connectivity, make sure your phone supports Bluetooth 4.0. Pairing with Bluetooth is just as easy as ANT+ however, once a device is using the data, then that’s it, you cannot tap into the data with two Bluetooth devices, you can with ANT+. So you can pair with numerous devices, but only use one bluetooth receiver (e.g. your phone) at a time.
The sensor doesn’t need a pinch or reset when pairing with a new device, just follow your receiving device’s instructions to pair with a new cadence sensor and spin your wheel around to wake up the Wahoo. The sensor will start flashing blue and red. Blue indicates that it’s awake and sending data, red indicates that it recorded a pass of either your wheel or your crank. After a couple of seconds it stops flashing to save the little battery.

The support for android is rather non existent, by which I mean that the instructions page on the Wahoo website only covers iPhone usage. However, the setup is pretty darn simple, it took me less than a minute after installing the Wahoo App. Check if your device has BT4.0 and you should be good to go.

The Wahoo Utility App is quite useful as it will give you direct insight in the data, this came in handy when setting up the sensor: 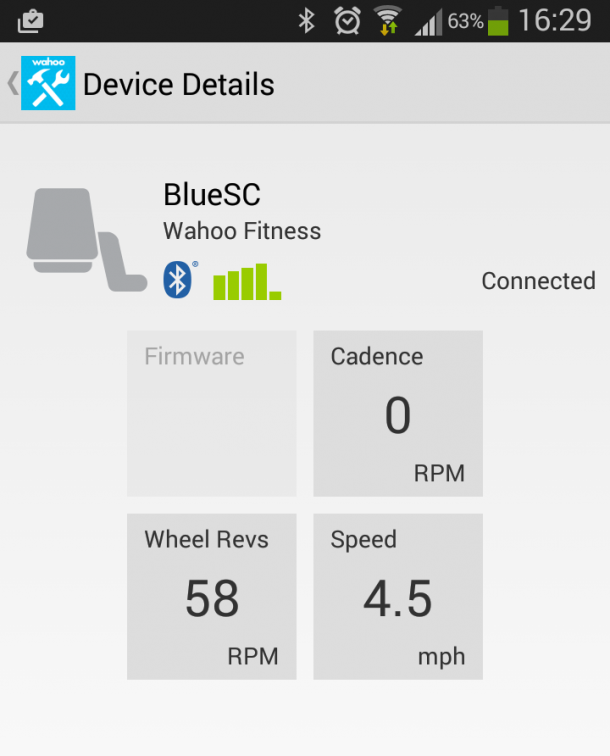 No cadence as all my hands were needed to make this screenshot.

Price wise it’s compatible with the average price in the market coming in at around $59 or €59. Where sensors range between 40 and 80. Where the true benefit is that with it’s dual connectivity it will allow you a smooth upgrade or change if you decide to use another brand. After the pairing it was smooth sailing. I might say this is the ultimate cadence sensor.

If you like my reviews, you can order the sensor for $55 at Wahoo. By using this link I get a small fee for your business and keep this blog running!